I may be a dedicated zero waste advocate, but just like everyone else I have guilty pleasures and moments of weakness. Currently I’m suffering from a serious case of  iGuilt. Although I have a perfectly good mobile phone, I wasn’t strong enough to resist the offer of a brand new free iphone from a service provider who wanted to get me on board. 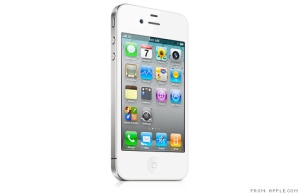 But it’s so shiny and pretty!

I’ve had my Blackberry for about two years now which corresponds with the average cell phone turnover rate for Americans (Recon Analytics, 2011). This two year time frame also corresponds with Moore’s law which states that the capabilities of technology double approximately every two years (that’s now happening even faster). There’s no doubt that technological upgrades contribute to mobile phone turnover but upgrades rarely make old versions obsolete. Even if the iPhone has some extra perks and fancy apps that I currently don’t have, my trusty old Blackberry can still make calls, text, play games and connect me to the ever essential Facebook.

Many people (me included!) don’t upgrade their phone because the old one is broken or because they desperately need the new technology (does anyone actually even use Siri?). We want a new phone, a new anything, simply because it’s new.  This desire for new means that Americans trash 150 million cell phones each year. In addition, it’s estimated that there’s 500 million more sitting around in people’s drawers (Leonard, 2010, p. 29)

Proving that its possible to live without a new phone every two years or less, it’s interesting to learn that other countries such as India and Brazil keep cell phones for over six years while Germans and Italians average four years (Recon Analytics, 2011).

My iGuilt is a part of a much bigger problem.

The problem with trashing our phones every two years, or even every six years, is that these little pieces of plastic, glass and metal cause some serious environmental, health and social problems during the various phases of their short lives. Here’s a quick overview…

So to summarize, cell phones and all electronic products in general, have some pretty serious consequences and effects on our world, our bodies and the lives of the people who make them. When you trash a phone you also trash an estimated 165 pounds of other waste that was created during the production of that phone. They are not disposable objects. And while my gut wrenching iShame won’t lessen any of the detrimental effects of my moment of weakness, it’s important that we’re aware of the consequences of our actions and effects of the products we use. We also need to demand electronics that are durable, repairable and upgradable. We need to demand electronics and recycling processes that don’t damage the environment, workers and consumers. We also need to take responsibility for our part in this mess through rethinking and adjusting our constant demand for new.

As for my part, the best thing that I can do from here is to guard my shiny new iPhone with my life, vow not to drop it in the toilet or lose it. Vow to repair it rather than trash it when something goes wrong. And most importantly, I vow to love this phone till death do us part and not a moment sooner.