For us Canadians and many others around the world, the change in season brings about a change in wardrobe as sandals and shorts are replaced by snowboots and marshmallow-esque (fake) fur-lined parkas. And while the majority of my summer clothes are merely relegated to the back of the drawer for the next few months, there’s never a shortage of casualties. Those shorts that are way too short, that t-shirt with the tags still on that I’ve never worn, those pants I’d hoped would someday come back in style – these all get tossed into the ‘for donation’ pile. And as the pile grows larger, my guilty concious rages. I try to console myself with the reminder that my pile of cast-offs are going to a ‘good cause’ as I’ll drop them in a bin for resale with proceeds going to charity. But as a zero waste advocate focused on upstream solutions and preventing waste in the first place, I can’t help but think that I just shouldn’t have so much to donate in the first place. 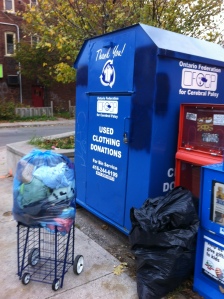 So I started to wonder…what if I didn’t have the option to donate all this stuff to a good cause? What if all my castaways were headed to the dump? Would I shop more carefully? Would I buy higher quality items? Would I take take the time to repair a tear or re-stylize out-of-date clothing? I probably would. Because trashing this stuff doesn’t make sense – it’s still good stuff but I just don’t want it. I want new stuff! And I have to admit that the week I brought my big blue bag to the drop-off bin I bought two new pairs of jeans.

Now there’s no doubt that donating clothing and other items is really important and beneficial – especially when we have so many people affected by poverty and emergency situations such as floods, fire or other travesties. But there’s another side to the culture of donating goods that is worth exploring. Donating all the junk we don’t want any more lets us get away with excessive consumption. It allows us to consume with abandon, knowing that if we don’t end up wanting or using it, we can just drop in that charity box on the corner.

In her book The Hidden Life of Garbage, Heather Rogers explains this point further noting that,

…organizations like Goodwill facilitated the discarding of still usable items by the middle and working classes. Providing this outlet for castoffs helped construct wasting as acceptable – even pious – in many cases derailing tough questions about the ramification of ever-expanding wasting. If such items went to someone in need, then throwing things away must not be so bad (2005, p. 100).

Roger’s thoughts on waste and charity were inspired by Susan Strasser’s Waste and Want which documents the social history of trash. Strasser describes that while reuse and repair were still strong values during the early 1900s, there was a greater availability of affordable goods for sale. Donation of items allowed people to “avoid the trouble of repair and remaking and get rid of unwanted things without having to define them as worthless” (1999, p. 141).

The trend has certainly continued as we show no sign of diminishing donations. Last year (2010/2011), the Salvation Army UK had a record year with a 4.5% increase in donated items and subsequent plans to install 500 new collection bins (Mann, 2011). Other collectors like Value Village receive thousands of items a day and fill warehouse-sized stores. In the online world of Craigslist there’s no shortage of desperate consumers offering items they describe as ‘perfectly good’ for free just because they need to make room for something new. 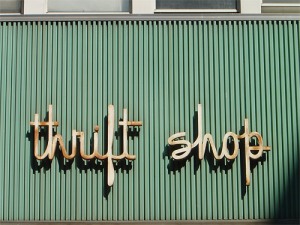 Drop off a bag and head to the mall.

The fact is, we’ve got too much stuff. We don’t need anything new. We need to be responsible consumers, aware of the environmental and social impacts associated with all these goods we treat as disposable (read more in my post Crimes of Fashion). So as I fill up yet another bag to bring to the donation bin I’m making a vow to not have so much to donate come next season. And the next time I want something new I’m going to head to the thrift shop to take advantage of someone else’s cast-offs instead of heading to the mall.

Ps. It’s also good to remember that sometimes one man’s trash really is trash. Charities collecting donated items spend precious money and time sorting out materials that aren’t suited for reuse with some charities reporting that 30% to 40% of collected items have to trashed. If you’re having trouble deciding what’s fit for the donation pile vs the dump, check with the charity directly or consult this handy guide. If you have something that’s too special to throw in a side-of-the-road bin consider contacting a local consignment or vintage shop.