As a cyclist in Toronto, the very fact that a bike lane exists on any given street is cause for celebration. But since the majority of our precious lanes are not separated, these lanes also often serve as parking spots for delivery trucks, city service vehicles and anyone else who needs to make a pit stop. This isn’t just a mere annoyance, it’s dangerous. Blocking a bike lane causes cyclists to merge, sometimes unexpectedly, with traffic.

In Toronto, it’s illegal to block a bike lane, even just for a moment, under Chapter 886, Article V which states that “no person shall stop a vehicle other than a bicycle in a bicycle lane.” As of January 2012, the fine for stopping, standing or parking in bicycle lanes was increased from $60 to $150.

But as with all rules, there are exceptions. Emergency vehicles (rightly so!) can park wherever they please as well as those city service vehicles that keep us functioning such as those working on telecommunications, energy, water supply or wastewater related issues. So if you’ve got to block a lane, what’s the best way to do it? 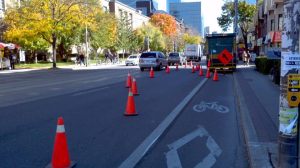 One Torontonian snapped this great photo (above) of Toronto Hydro showing us how it’s done along College Street. The workers set up pylons to temporarily rebuild the lane so cyclists had the time and space to safely merge with traffic. A big thank you to Toronto Hydro! 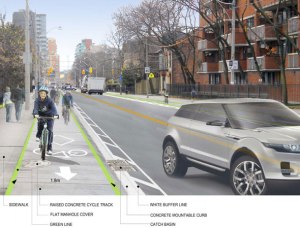 As for those separated bike lanes…Toronto is just starting to catch on with plans for separated lanes on Sherbourne Street from Queens Quay to Bloor Street. However, since Toronto is currently governed by a kangaroo court, you will be baffled to learn that the addition of these new spiffy lanes means that current existing lanes on Jarvis st. will be removed (removal of lanes is estimated to cost the city $300,000). 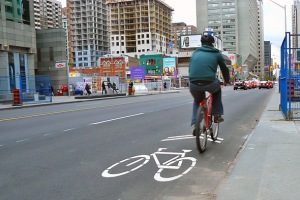 Without a line to indicate a separate lane, bike sharrows don’t mean much. 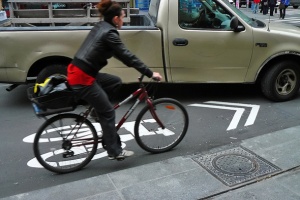 While cyclists mourn the loss of Jarvis lanes and wait with bated breath for those new lanes to appear, I’d be satisfied if the city would opt to add a painted ‘separating’ line to the existing ambiguous bike symbols on some of our streets. Without the line indicating that there is indeed, a separate space for cyclists, these symbols, known as sharrows merely encourage or “recommend that cyclists and drivers respect each other’s right to the road, they don’t prohibit either party from infringing on the other’s space” (BlogTO, 2010). Bike sharrows often fall directly in line with spots for street parking and as seen in the photo below, don’t really mean much in terms of giving cyclists space or safety on the road.

What’s the bike lane situation in your city? Do you think sharrows work?

2 thoughts on “Get Outta My Bike Lane!”